Arizona candidate, Martha McSally, is a former A-10 fighter pilot and the first American woman to fly in combat following the 1991 lifting of the prohibition on female combat pilots. 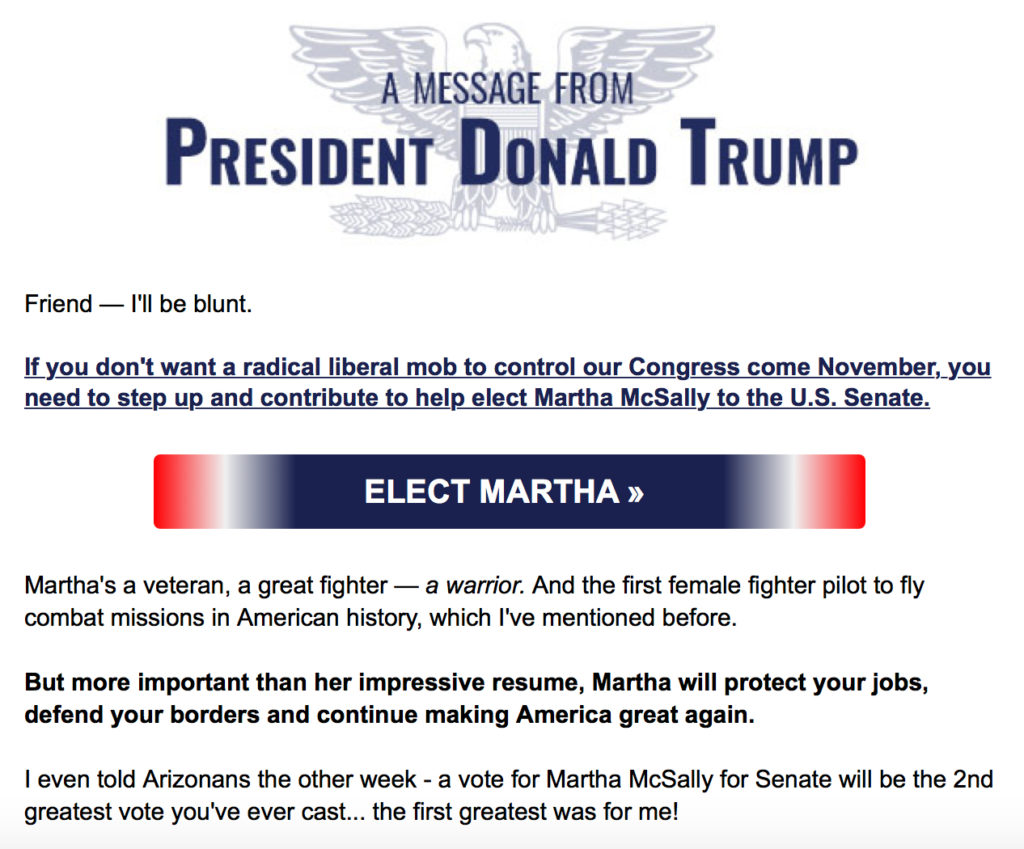 Campaign Solutions was tasked with using Martha McSally’s incredible story and national reputation to maximize online fundraising results. The race was extremely competitive throughout the cycle and universally believed to be one of the most contentious in the country.

The McSally campaign developed a reputation amongst email subscribers for its dynamic messages that constantly tested new messaging effects, personalizations, and layouts.

By Election Day, the campaign raised $9 million gross online, thanks to 89,000 unique donations and grew the size of the email file by 900%. Out of the gross amount raised, well over half were generated through email fundraising efforts.

Not only did the McSally campaign consistently exceeded its fundraising goals, but it did so by leveraging existing subscriber data, new technology, and personalized messages. Our team helped the campaign send nearly 300 unique pieces of copy from January-November, totaling 112.9 million individual outbound email. Email campaigns were complemented by the use of custom donation pages, which counted over 130 unique pages this cycle. 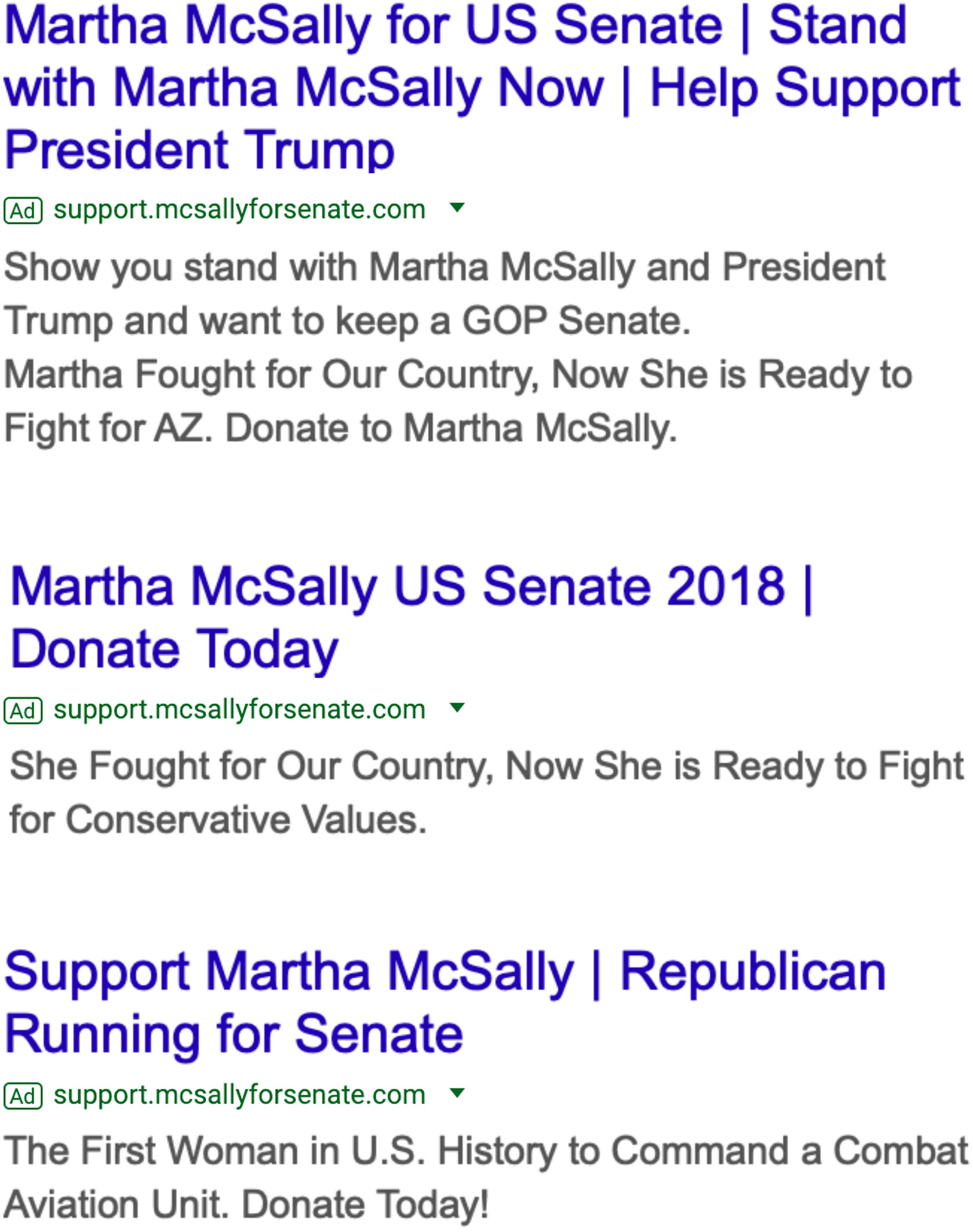 One of the major cornerstones of the successful fundraising plan was to use Google advertising as a tool for both small dollar fundraising and new donor acquisition.

By the end of the campaign, the Google search effort reached enormous scale and became one of the single most successful fundraising channels for the campaign, with search ads alone raising nearly $700,000 from almost 4,200 individual donors and a return-on-investment of over 750%. 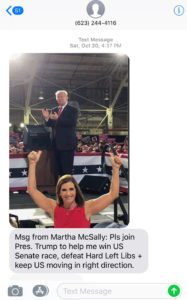 Phone numbers were acquired by rostering the email House File donor information against a nationally-used database of valid cell phone numbers. This step greatly enhanced our SMS deliverability and reduced the possibility of bounces. Next, we compared our cleaned list of valid cell numbers against our One-Click database. Each donor was sent a link that enabled them to donate instantly without re-entering their donor information. Finally, we merged personalized content into the SMS from our existing donor data. This ensured a frictionless process, which was tailored for the mobile experience. 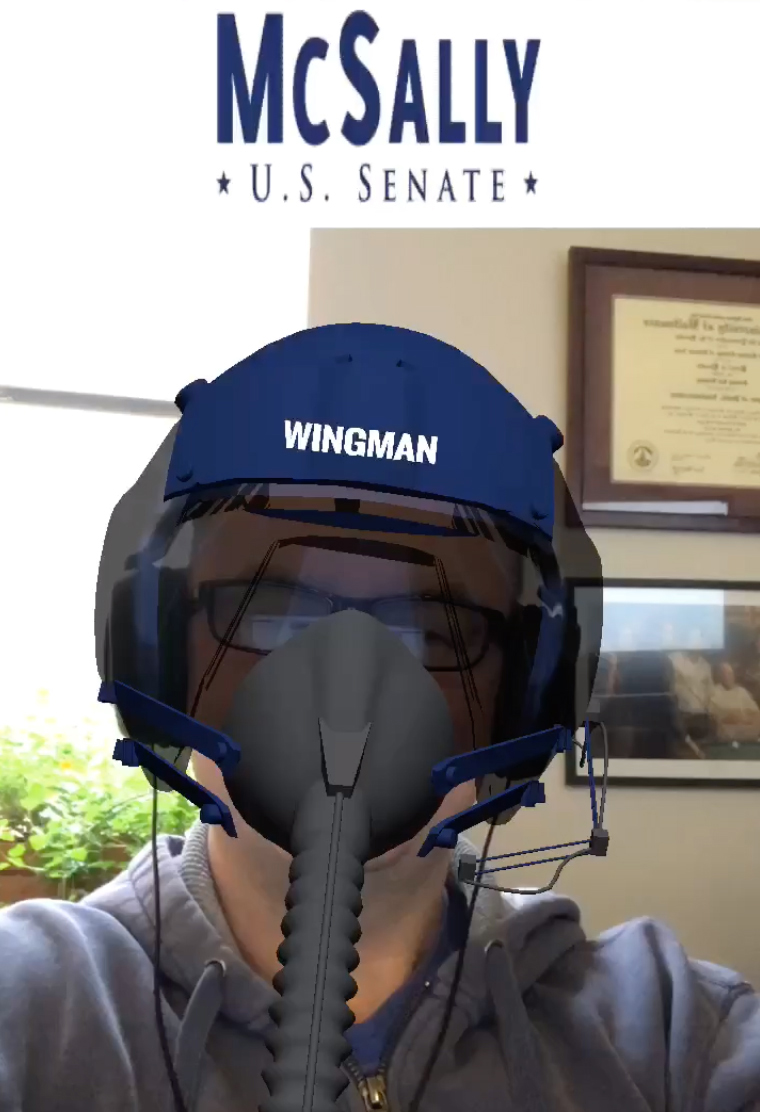 In 2017, Facebook’s Camera Effects Platform released a new tool – Augmented Reality. Using the Facebook app and a camera on a mobile device, users can access the AR tool to interact with responsive digital filters in the real world.

As the first Republican political firm to leverage this tool, Campaign Solutions pioneered this new technology to support clients’ branding efforts and generate earned media around the innovation.

To highlight Martha McSally’s distinguished military career, we created a virtual version of her A-10 helmet that supporters can wear. Users could then share the image with friends or use as their profile picture.

On October 5, 2018, Campaign and Elections’ highlighted Martha McSally’s use of augmented reality, noting that it was likely the first political campaign to use AR.